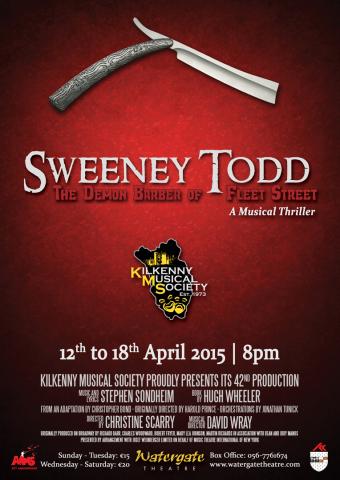 Kevin Reade and Sarah Brennan star in the iconic roles of the tormented and vengeful barber - Sweeney Todd, and the entrepreneurial, amoral meat pie shop owner - Mrs. Lovett. They will be joined by David Doyle as Anthony and Kevina Hayes as Johanna.  Ciarán Dunphy plays flamboyant Italian rival barber Adolfo Pirelli, with Adam O’Brien as Tobias Ragg.  The lecherous Judge Turpin will be played by Fergal Millar, while Alan Grant will play Beadle Bamford and Delia Larkin as The Beggar Woman.

This magnificent cast will be supported by a 12-piece orchestra and a chorus of almost 50.

Christine will be joined on the creative team by renowned musical director David Wray in his first show with KMS, set design by John O'Donoghue and lighting design by Colm Eaton.