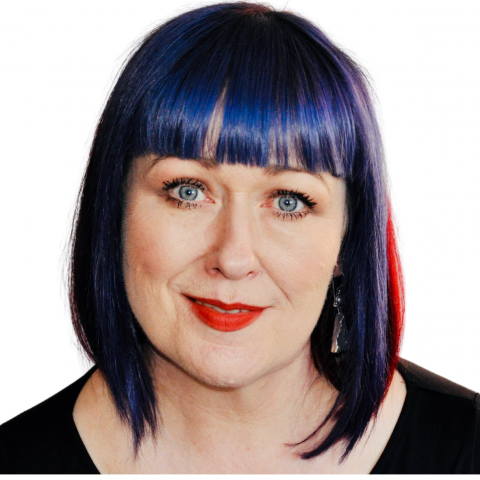 A Dublin native, now resident in Kilkenny, Christine is a freelance director of plays and musicals, and one of Ireland’s leading vocal coaches, with a particular interest in vocal health and science.  She is artistic director of Red Alchemy Theatre Company and Voice Studio, musical director of female vocal sextet, Alchemy (alchemyvox.com) and owner of The Voice Industry (thevoiceindustry.ie)– a specialist coaching consultancy for business leaders who want to maximise the potential of their speaking voice.

As a founding faculty member of the first ever musical theatre degree in Ireland, Christine lectured in voice, acting and music theatre history, and she continues to be active as a guest lecturer and masterclass facilitator.  In her private vocal practice, Christine has a proven track record in contributing to the success of actors and singers: her clients are currently playing leading roles on Broadway, the West End, and major Irish venues including The Abbey and The Gate Theatres.  The Red Alchemy Voice Scholarship is offered annually, by audition, and is open to applicants from all over Ireland.

Her vocal group, Alchemy, performed the sell-out Winter Song at The Sugar Club, Dublin, A Night at the Museum in the Medieval Mile Museum, Sounds of Summer at The Set Theatre, Christmas by Candlelight at St. Canice’s Cathedral.  Alchemy provided the entertainment for the Vótáil 100 celebrations at Dublin Castle, and were special guests at the Dublin Bowie Festival.  Their début album is now available on iTunes, Spotify and Apple Music https://music.apple.com/ie/album/alchemy/1491576077.

Christine directed the new musical drama, Find Your Way Home, at New York’s Symphony Space, Broadway, following a short US Tour.   She produced and directed the critically acclaimed Vincent – A Play by Leonard Nimoy (National Tour), Listen To My Heart (National Tour), The Lonesome West (National Tour) and Ritual For Dolls (Mill Theatre, Dublin) – all for Red Alchemy Theatre Company.   For Autumn/Winter 2020 Christine is bring major Broadway and West End stars to Kilkenny for the concert series Leading Lights: An Intimate Audience with Alex Sharpe and An Intimate Audience with Killian Donnelly at the Watergate Theatre.

Other credits are Michael Collins – A Musical Drama, Jason Robert Brown’s Parade, The Full Monty and Sweeney Todd (all at Watergate Theatre), Ragtime (The Premier, Thurles), Sondheim’s Putting It Together (Pavilion Theatre), Kander & Ebb’s Cabaret, Rent, One Voice, A Little Light Music (all at The Helix Theatre), The Addams Family, Chicago the Musical, Irish première of The Producers, Sondheim’s Follies (both at National Opera House, Wexford), Irish première of High School Musical (The Forum, Waterford), West Side Story (Solstice Arts Centre), Sondheim’s A Funny Thing Happened On The Way To The Forum (Millbank Theatre) and Into The Woods (Draíocht & Theatre Royal, Waterford).

Originally an actor/singer, Christine worked professionally at theatres and concert venues all over Ireland, playing widely diverse roles in both plays and musicals.  She has played opposite international musical theatre stars such as John Barrowman, David Kernan, Millicent Martin, Dave Willetts and Lorna Luft – daughter of singing legend, Judy Garland, has frequently broadcast live concert performances for RTE, and toured Ireland and the USA in cabaret.  Her many tv/radio credits include appearances on The Late Late Show, The Gerry Ryan Show, Theatre Nights (all for RTE) and Friday Night Is Music Night (BBC).  After an absence of almost fifteen years, Christine returned to the stage in 2019, playing the role of Emsy in A New Fish at Smock Alley Theatre, Dublin.

The global pandemic inspired Christine to create and produce a series of online music concerts – Sing For Life - performed by her vocal students – which raised almost €15,000 for the Irish Cancer Society.  During this time she also created an online community initiative (Christine’s Sofa Sessions) – particularly designed to encourage the older members of our community to participate in thrice weekly online group sing-along sessions.

In previous years Christine welcomed US Emmy Award-winner and Tony Nominee, Liz Callaway, to deliver a memorable performance workshop in Dublin, and has invited Broadway composer John Bucchino to present a masterclass of his work to a selection of Ireland’s music theatre performers; she collaborates with both on an ongoing basis.  Earlier this year, she hosted and accompanied a live Performance Masterclass with Killian Donnelly onstage at the Watergate Theatre, Kilkenny.

Christine originally trained in voice and piano at the Conservatory of Music & Drama and the Royal Irish Academy of Music, and she holds a first-class MA in Theatre Studies (Directing) from Dublin City University.  She is a member of AOTOS and the British Voice Association, and is currently serving as PR officer for the Kilkenny branch of Network Ireland.    She has a big passion for dogs and in supporting mental health; every week, as a Visiting Team for Irish Therapy Dogs, Christine and her golden retriever, George, spend time with the service users at the Department of Psychiatry in St. Luke's Hospital.

“Christine is someone who I completely trust.  She is honest with me and encourages me, as an actor, to take chances and make certain choices.  I wouldn’t be where I am today without her help.  Throughout my career she has cast me in some of my most defining roles, which shaped my career and made me the actor I am … It’s not very often you find a director who you are looking forward to working with again.  Christine also encouraged me and gave me full support when I was deciding whether to try and make a go of it in London.  I can’t recommend anyone better than Christine to help or encourage fresh new talent.”