We are so disappointed to announce the postponement of our fabulous concert series with Killian Donnelly and Alex Sharpe.

We will do our very best to get back up and running as soon as we are allowed to under the Covid-19 restrictions.

In the meantime, we thank you all for your understanding and generous support.  Please stay safe and we hope to see you very soon.

The series comprises two solo shows where, in a beautifully intimate and pared back setting at The Watergate Theatre, we get an up-close-and-personal encounter with Broadway and West End star, Killian Donnelly – and the renowned Alex Sharpe – West End music theatre star and lead vocalist with Celtic Woman. And with the musical legend David Hayes (Riverdance, The Voice) on piano, a memorable occasion is guaranteed.

Each show will have a VERY limited capacity. There will be a matinée (3:30pm) and evening performance (7:30pm) on Sunday, 15th November (Alex Sharpe) and Sunday, 22nd November (Killian Donnelly).

Tickets on sale now from

KILLIAN DONNELLY is a real star of musical theatre – and a multi-Olivier Award Nominee – having taken the West End and Broadway by storm in Les Misérables, The Phantom of the Opera, Billy Elliot, The Commitments, Kinky Boots and more. He most recently led the UK and Ireland touring cast in the title role of The Phantom of the Opera – a journey that was sadly cut short on account of the global pandemic. Prior to that, he had reprised the role of Jean Valjean touring the UK and Ireland in Cameron Mackintosh’s new production of Les Misérables, having starred as Valjean in the London original at the Queen’s Theatre. His Broadway début saw him recreate the role of Charlie Price in Kinky Boots, having originated the role in London – for which he received 2016 Olivier Award Nomination for Best Actor in a Musical, 2015 Evening Standard Theatre Awards Shortlist for Best Musical Performance, and, for the Original London Cast Recording, 2017 Grammy Award Nomination for Best Musical Theater Album.

With an outstanding career in musical theatre, ALEX SHARPE began her career in the coveted role of Dorothy in The Wizard of Oz at the Olympia Theatre in Dublin. She played Janet in The Rocky Horror Show, Young Sally in Stephen Sondheim’s Follies, and Jenny in Aspects of Love, before being asked to play Éponine in Les Misérables for Cameron Mackintosh and also in the Concert Tour of Les Misérables – for which she won wide acclaim. Alex also created the role of Bernadette in the Andrew Lloyd-Webber/Ben Elton musical The Beautiful Game in London’s West End. In more recent times, Alex was seen as a lead soloist with the popular Irish phenomenon Celtic Woman - touring the whole of America since 2007. 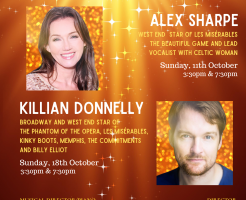