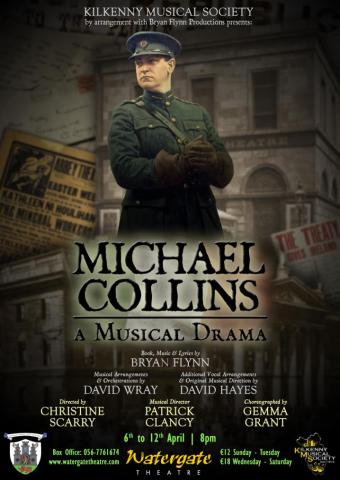 The tapestry of Irish history boasts many an iconic figure weaved into its fabric, their legacies fuelling the stories and memories of our past and present peoples; none more so than Michael Collins. Revered by some, resented by others ‘The Big Fella’ as he was affectionately known, has imprinted his story upon the psyche and culture of our politics and our people since the volatile events of the Irish Civil war and his ultimate assassination in 1922 at Beal na Blath. His inspiring but ultimately tragic story has been captured in one of Ireland’s newest & most exciting musicals; Michael Collins – A Musical Drama. The creative seed of Waterford man Bryan Flynn, this musical re-telling of a familiar but often forgotten story is KMS’s choice of show for 2014.

Set against the backdrop of the War of Independence, the treaty negotiations and ensuing civil war, Michael Collins – A Musical Drama is a mesmerizing piece of musical theatre. Creator Bryan Flynn wonderfully captures the angst and frustration of an Irish people struggling under stifling English rule, Collins’ charismatic leadership and a bitter love story which threatens to tear a friendship & a political alliance apart.

Playing the central role of the big fella himself is Michael Hayes, Harry Boland is Portlaoise native Eoghan Fingleton, Ciaran Dunphy takes on the challenge of depicting Eamon De Valera, while Kevina Hayes is cast as Kitty Kiernan. 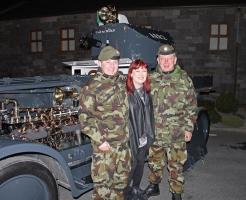