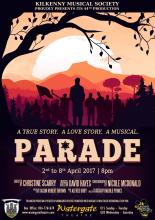 Parade tells the heart-wrenching, true story of Leo Frank: a Brooklyn-raised Jewish man living in Atlanta who was wrongfully convicted of the rape and murder of his thirteen-year-old employee, Mary Phagan, in 1913.  A momentous case which split America in two, it has a characteristically rich, intricate, and wide-ranging score penned by Jason Robert Brown, and a bold willingness to dive into the complexities of early 20th century social relationships in the South.  Parade is a sophisticated, dark tale with endless depths for a highly skilled company of actors and musicians to plumb.