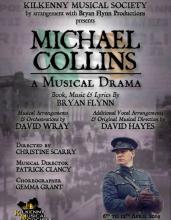 Michael Hayes, Ciarán Dunphy and Kevina Hayes lead the front line as Michael Collins, Eamonn De Valera and Kitty Kiernan respectively. There has been some commotion in the weeks running into this production as several life-size cutouts of Michael Collins were stolen from the streets of Kilkenny. There has been much speculation about the thieves’ motives, with opinions ranging from ardent supporters collecting memorabilia to political dissidents seeking to cull promotion of the Big Fella. The real reason for the thefts may never be known but it has certainly piqued people’s interests, to the extent that even some news outlets have reported on the story. Following all this excitement, it is no surprise to learn that the show has completely sold out, well in advance of its run.